Posted on 15th February 2015 by AlanGillilandAdminAcc — No Comments ↓ 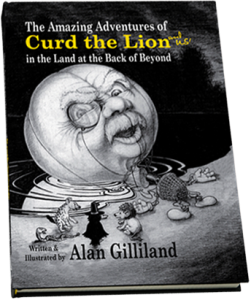 One day the Twins, Henry and Henrietta, are having a St. George-and-the-Dragon battle in Mum’s bedroom with Curd as the Dragon, when they have a dreadful calamity and spill talcum powder all over the bedroom! After telling them off and tidying up, Mum accidentally leaves Curd the Lion and her favourite jewelled brooch unnoticed beside the bed. A Raven flies in and steals it.

Mum blames the Twins and says that, unless her brooch is returned before their Birthday in four days’ time, she’s not only going to cancel their Party but also give their four Animals, Curd the Lion, Pilgrim Crow, Sweeney the Heenie and O’Flattery the Snake, to the Charity Shop!

Curd leads the Animals out that night, all the way to the Back of Beyond, to try to find the Great Raven and rescue the brooch, seeking clues as they go. And so begins an Amazing Adventure… Meeting at first the unfathomable inflatable, Professor Balloonafuss, their route becomes so riddled with pitfalls and the talk of the beasts so twisted, they can hardly tell whether they are coming or going.

His Majesty King Much of a Muchness the magpie-ruler, King Ziggu-Rat, Nook and Cranny the mine goblins, Mother Beanie and Queen Mumbie-Bumbee are among the creatures they encounter and that’s before they reach the heart of the nonsense, the Holywood, with its Barguest Beast and the Great and Terrible Minorbore, Knightly Sir Rush and his Kalandar or even the two-headed Dodongs, Ineffable Emperor of the Land of Nod, that sits in the middle of the Great of Slumber… Reaching at last the Rocks of Brimstone and the Corbie-stone, lair of the Great Raven, they discover both friends and foes met along the way also converging on this pivotal rock. A great battle ensues…

This is a fantasy story you can visit in real life!

Using the map at the beginning, the reader can find the place where the story is set: Brimham Rocks, a National Trust site in the Yorkshire Dales west of Ripon.

Starting on the footpath beside the Twin’s house, you can follow the adventures of Curd and his friends, finding the story’s landmarks along the way, including the mine-entrance, the waterfall and footbridge, the cliff, the Minorbore’s twisty tree hidden in the Holywood (a holly wood) and so on, all the way to the Rocks themselves, where you can trace the path they took along the ridge, through the great crack in the rock and on up to the great Corbie Stone itself.

But stick to rights of way, don’t go down mine-tunnels and be very careful climbing on the rocks (children, only under supervision). 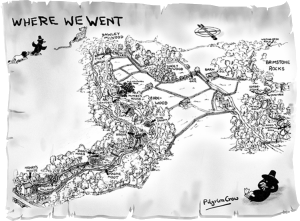 Where we Went – the map